I must begin with a confession.

I was sat at the very top and rear of the main stand. The game wasn't even televised. I'd even taken the trouble of writing my incendiary message in the native language of the visiting foreign side. "Welcome to Hell" it was not. The game finished 0-0.

Anyway, having faced up to my shameful past, I feel qualified to comment upon the recent revival in quaint (but very, very earnest) A4-sized football banners.

What first strikes you upon seeing these pitiful printed protests (usually against some perceived crimes against football administration) is the person holding it aloft. A middle-aged, stern-faced man. A middle-aged, stern-faced man who took the conscious decision before the game to conceive, type and print a message of protest on to a piece of A4 paper and take it with him to a football game, to hold it up for nobody in particular to read. Furthermore, the accessibility of A4-size paper notwithstanding, this man knew he'd need to get this banner on TV to have any chance of it being noticeable or legible to any more than half-a-dozen people. It is the minuscule size of these banners that set them apart from vandalised bedsheets in the cringeworthiness stakes. 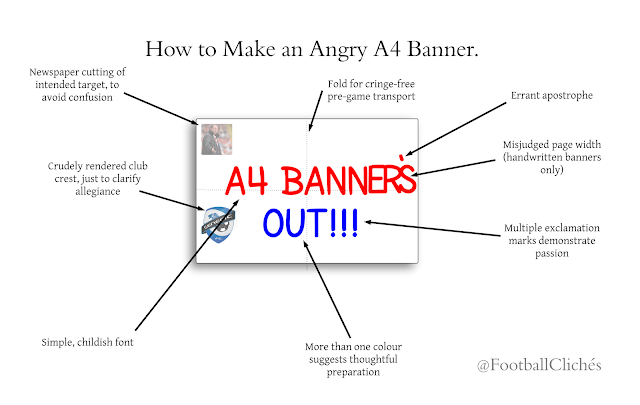 Word processing advances have gradually phased out the hand-written A4 banner which was often hampered by a misjudgment of the available space, leading to the last few letters having to be squeezed in by their (surely now crestfallen) amateur designer. A3-size paper is now increasingly common, saving those who really want to make their opinion heard the arduous task of printing two separate A4-size segments and taping them together, as if their dignity wasn't blown to quite enough smithereens.

We are yet to see the widespread use of iPad-based banners, which would offer the most fickle fans the real-time capability of targeting the overpaid underperformer of their choice, while the Etch-A-Sketch has survived over half a century without (to my knowledge) being used to declare someone a wanker at a Football League ground. But can these A4 banners do it on a cold, wet Wednesday night in Stoke?

Homemade, hand-held displays of allegiance do not necessarily have to be negative in their outlook. Tin-foil-and-cardboard FA Cups, which make up for their lack of bile in sheer preparation time, continue to be a vital component of the magic of the FA Cup. However there has been a disappointing lack of progression to 3D forms, particularly given the malleability of the foil.

So, if you're sat at your computer on a Saturday morning, mulling over an A4-sized banner to take to your game that afternoon, think some more. Really? Is it really worth it?
Posted by FootballClichés at 07:20

One nice touch I've seen was the A$ banner thoughtfully slipped into a plastic sleeve...you know, in case it's raining.

An infuriating variation on this theme was the hordes of witless scalliwags who took small blackboards and a piece of chalk to the Test matches in the recent NZ v England series. They then scribbled desperately lame "witticisms" on them and held them up until the morons in the TV production van focused a camera on them. If the shot was held for more than 2 secs, you would see one of them answering their phone as Mum at home rang to tell them "You're on!"and then they would start leaping up and down and waving manically, usually not in the direction of the camera which was filming them.