January
Transfer limbo
noun
An unpleasant existence between being frozen out at your current club and the successful negotiation of a move away.

The slamming-shut of the January transfer window is now prime-time (and, indeed, post-watershed) entertainment for football fans, and West Bromwich Albion's Peter Odemwingie provided the highlight that even seasoned cliché-spotters considered a novelty. The Nigerian forward turned up at Loftus Road, only to be denied entry because Queens Park Rangers hadn't struck a deal with Albion. Tail firmly between legs, Odemwingie returned to the Hawthorns to face a hefty fine and a bit-part role for the remainder of the season. He finally left the club in the summer, joining Cardiff City in rather lower-key circumstances.


February
Spit spat
noun
Mandatory description for the act of (but particularly the subsequent fallout from) spitting at a fellow professional.

Spitting reared its distinctly ugly head in February, as West Brom's Goran Popov saw red for launching his phlegm at Tottenham's Kyle Walker. Furious Albion manager Steve Clarke immediately listed all the people and organisations that Popov had let down, and the Macedonian's contrition was swift and sincere, but Kyle Walker failed to provide the customary confirmation of whether he would rather have been punched in the face than spat at.

March
Minnow
ˈmɪnəʊ
noun
Hapless (and specifically international) whipping boys who have an assortment of relatively ordinary day jobs, once looked upon with patronising curiosity but now with increasing irritation by advocates for World Cup pre-qualifying.

In the run-up to England's latest leg of the road to Brazil, it became clear that writing about San Marino was football journalism's equivalent of actually having to play San Marino - a procession through the motions (Steven Gerrard: "We don't look on it as an easy game"), while dusting off the Wikipedia page of Davide Gualtieri. Ultimately, the one challenge for the back pages was navigating the black hole of scoreline headlines - the eight-goal margin. There's FIVE STAR, HIT FOR SIX, SEVENTH HEAVEN and CLOUD NINE for all the other thrashings and capitulations, but we are yet to see any creative advances on GR-EIGHT.

Luis Suarez caught up with an old friend in April and committed not only the abhorrent act of biting Branislav Ivanovic but also the reprehensible opening of a subsequent floodgate of puns relating to fangs and champing at the bit.

Ludicrously dragged-out pre-match coverage of the FA Cup Final, including crucial footage of the team buses arriving at Wembley. 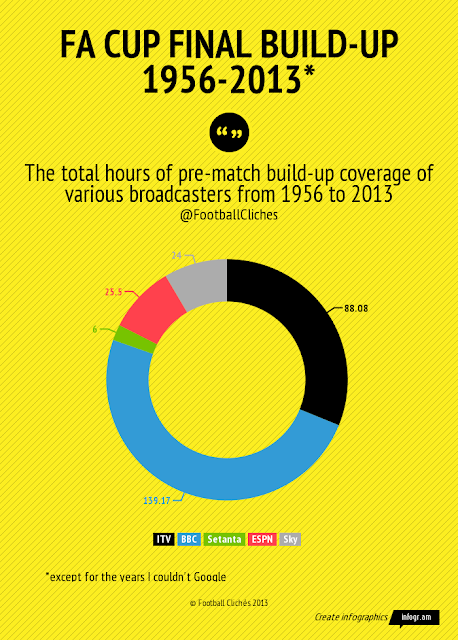 ESPN broadcast only three Cup Finals during their brief foray into UK football coverage, but are still responsible for around 9% of all pre-match build-up in the last 50 years. This year's marathon began with a chat to Wembley's head chef at 8am, and the FA Cup Final cliché sponge was well and truly squeezed dry by the time plucky Ben Watson had pluckily headed plucky Wigan into Wembley folklore eleven hours later.

June
Unveil
ʌnˈveɪl
verb
To provide physical proof of a new manager's recruitment by presenting him at a press conference, but not from underneath an actual veil.

Jose Mourinho returned to Chelsea and Roman Abramovich to claim the prestigious title of The Worst-Kept Secret in Football and face the inevitable retrospective "Special One" narrative. He was instantly rebranded as The Happy One, and now sees his moniker change on a weekly basis depending on his apparent mood.

July
Spectre
ˈspɛktə
noun
The haunting (albeit very much still-alive) presence of a powerful predecessor, which casts a shadow over its unfortunate victim.

It was then David Moyes's turn to face the press, as he attempted to fill the shoes of Sir Alex Ferguson at Manchester United. In other sartorial analogies, Moyes was continually boosted by the news that he was "cut from the same cloth" as Ferguson.

Transfer sagas begin with a hands-off warning and end with a nervous display of ball-juggling in front of a massed rank of camera lenses. In between, we must endure a tale of greed, posturing and bureaucracy designed to fool us all as it meanders to its mutually-agreeable conclusion. In 2013, the protagonist was a wide-eyed Gareth Bale, who sat innocently at the centre of the maelstrom of transfer silly season: 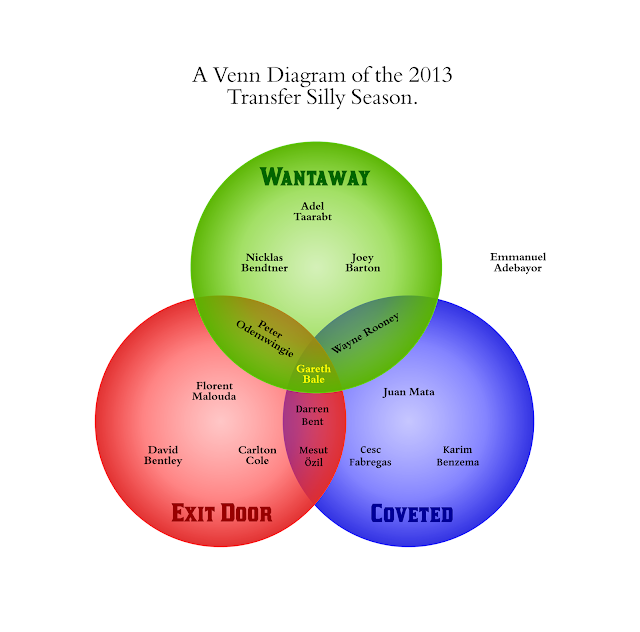 Everyman football hero Rickie Lambert's ascension from Premier League surprise package to facing all-conquering Moldova in a World Cup qualifier brought into question the concept of "international level" and all that it supposedly entailed. A goal on his competitive debut suggested it's not so much a step up - more of a barn door.

October
Crisis
ˈkrʌɪsɪsnounA deliberately low-threshold state of relative emergency reserved for Champions League qualification-chasing clubs who have lost several matches in quick succession. Must be made conspicuous by its absence when form improves.

Moyes's United side, already stung by a derby day mauling at the hands of Manchester City, went down 2-1 at Old Trafford to West Brom to become the Premier League's latest Crisis Club™. The obligatory crisis-what-crisis response came in the form of a 12-game unbeaten run, which was halted by back-to-back home defeats. This, in turn, was followed by a string of six straight victories, which was ended abruptly by another home reverse on New Year's Day.

Crisis? What crisis? This crisis. What, that one?

Stoke goalkeeper Asmir Begovic, bound by the code of the Goalkeepers' Union, had to conceal his glee after hoofing his way over opposite number Artur Boruc and into pub quiz machines of the future. Begovic continued his mandatory sheepishness right up to his studio appearance on Match of the Day 2, at which point he was allowed a wry smile - the only sort of smile permitted anywhere in football.

December
Thick and fast
adj.
Scheduled in punishingly quick succession during the Christmas period for the amusement of fidgety, overfed British football supporters.

Festive football fixtures, including "Christmas crackers" and "Boxing Day belters", are a gloriously alliterative tradition. Own goals and suicidal backpasses that take place before the 25th may be described as "early Christmas presents", while the search continues for a referee that actually was on a manager's Christmas card list.