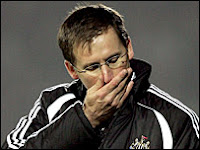 If you've read the back pages of the papers this morning, you will be aware
of the hilarious match at St. James' Park last night, when "The Best
Supporters In The World" decided to stay in and watch Big Brother instead - not a bad decision as it turned out.

You will know that Newcastle scored a goal and that Birmingham got five, Taylor was sent off and that Glenn Roeder was sorry. But how did the Geordies go out? Yes, I know their back four seem to have had a row and decided not to speak to each other and I know that Shay Given must have left his cape at White Hart Lane on Sunday, leaving him unable to do his normal Superhero impression. But those all answer "why" Newcastle are free to concentrate on the league.

The "how" is, in my eyes, a straight choice. Were they dumped out or did they crash out? I think we can certainly agree on one thing - that it was unceremonious. Despite nearly the whole of the pre- and post-match activities being a ceremony of sorts (the warm ups, the toss, shaking hands, swapping shirts), Cup exits, whether dumping or crashing, have been deemed by whatever power decides these things, always, always unceremonious. I don't make the rules mate - it's a fact.

It is my belief that Newcastle crashed out of the cup. Dumpings are for when two supposedly equally-matched sides face each other and one hands the other their arse on a platter. 3-0 is the perfect score for this sort of dumping. The second sort is when a team from a lower league manage, for some reason, to click, the ball bounces their way and they genuinely, for the key moments in the game, manage to outplay the better side and fluke a win. This team will also have their arse felt up at some stage later on in the competition and a part of me is glad when they do. The big side also have to be away from home to be dumped out!

Sides crashing out are much more fun. Who cares that Birmingham scored five, or even cares that they were playing? Not me. The important fact is Newcastle let in five largely avoidable goals. A joke club, a joke team, playing like jokers. Did anyone send a text last night to a mate saying "are you watching this - Birmingham are quite a good team"? Course you didn't. It was all: "Look how shit Newcastle are" and "is there time for ten?"

And that's the real magic of the Cup. We've got Ronnie Radford for our misty-eyed reminiscing of players who, let's face it, aren't very good. That's his job in history. Can you recall who scored the winner for Wrexham vs Arsenal? Not straight away, I bet, unless you're a Wrexham fan. Just as in years to come you won't remember DJ Campbell and Cameron Jerome - you'll just remember Newcastle crashing unceremoniously out of the cup.

Good.
Coxie
Posted by FootballClichés at 15:22