"Shall We Sing A Song For You?" 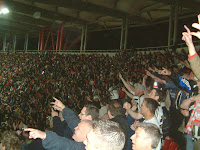 Nowhere in football is the meeting of modern, nouveau football and traditional values more apparent than in the stands and terraces around the country on a Saturday afternoon, as rival fans goad each other in a battle of basic (and rather limited) wit.

The pre-match and half-time entertainment now involves sights such as a myriad of dancing, pre-pubescent, cheerleading girls (and occasionally boys), the parading of past ‘legends’ (such as Espen Baardsen, who walked out in front of the Spurs fans recently as they struggled to remember who he was. When asked “what was it like playing with Jurgen Klinsmann?”, he replied: “I can’t remember, I didn’t play much and when I did it was in goal”). Overly-jubilant competition winners get introduced to a crowd who are far more interested in reading their programme or queuing for a pie or a piss than half-heartedly clapping the fat idiot who was sad enough to enter the sponsor’s quiz in last week’s programme.

Most fans appreciate that, other than the match itself, the only other way that they will get real entertainment is in ripping the piss out of the other team’s relative ambitions, geographical positioning and employing some stereotypical regionalisation. There is a general acceptance that some grounds are more ‘hostile’ or ‘lively’ than others and it generally appears that the smaller the ground, the closer to the pitch the fans are and the more regional their accents – the more ‘difficult to go to’ the stadium is for the opposition.
The generic pattern for opposing fans trading insults and following an almost scripted procedure of chant and counter-chant is an odd mix of modern influences and deep-rooted, almost sentimental, ritual. Here are some classic and, indeed, more modern examples of non-team-specific chants traded by supporters across the country:

“You’re Not Singing Anymore”
Belted out, often with real vitriol, following either an equaliser or when taking the lead in order to mock the opposition’s misery or shock at the turn around in fortunes. Can be fuelled either by relief, sheer joy or with revenge, depending on the situation in the match up until that point. Hardly a witty verse and occasionally sung out of habit rather than as an actual put-down.

“Who The Fucking Hell Are You?”
A tricky one. There needs to be a general acceptance that this chant is appropriate for the opposition before it is used, yet most fans will always agree on its suitability. Clearly reserved for more obscure or even ‘unfashionable clubs’, it is a perfect example of a traditional swearing chant still in use today - even though it always elicits the same strong response of the opposition’s textbook team-name chant (e.g. “United!”) . It is, therefore, a clear indication of an underlying mutual respect for the chant and counter-chant culture.

“Shall We Sing A Song For You?”
One of a small collection of chants that also includes “Your Support Is Fucking Shit”, whose clear intention is to suggest to the rival fans that they are pathetic and half-hearted supporters of their team. One of the biggest insults you can deliver to a man who is paying more money than he can probably afford (and that his wife is aware of) to follow his team week-in-week-out. Again – this goading will predictably galvanise the said fans into a vociferous reply.

“Are You [insert winning team’s rival] In Disguise?”
A chant with a strange self-satisfaction. Although being directed at a typically poor-performing opposition’s fans, it acts as a double-edged sword as it manages to mock both the opposition and the chanters’ rivals in the same breath. The efficiency of this chant often leads to detectable smugness in the tone of the chant itself and is one of a group of the mildly more witty attempts that can be tinged with laughter from fans who only go once or twice a season and find such ‘clever’ goading as laugh-out-loud funny.

“We Can See You Sneaking Out”
Delivered as the final nail in the coffin/dagger through the heart for fans who have often travelled long distances on usually cold weeknights to see their team get battered. It can be fun to watch the hunched over and hurriedly scurrying fans disappear down the stairs, knowing that they can hear you rubber-stamping their misery.

“You’re Just A Small Town In [Insert rival team name]”
This ridiculous chant does the geographical knowledge of your average football fan no favours. Particularly, it appears that every fan travelling to London for matches believes that every stop on the Underground is a different county or even principality. Examples include “You’re Just A Small Town In Arsenal/Chelsea/Fulham”. The more intelligent and wicked fan may be confused into believing that this is faked ignorance in order to frustrate you even more. It’s not. It’s stupidity.

“[Insert competition]? You’re Having A Laugh”
One of an unfortunate and increasingly popular selection of modern chants that attempts to ridicule the ambitions of the opposition club and yet appears to be most often delivered by fans of clubs so mid-table and unimportant that the equivalent reply would be to involve every possible tournament available. Utilised for nearly every conceivable award or trophy that a club could aspire to, I have always wondered whether the chant of “LDV Vans Trophy? You’re having a laugh” has ever been attempted.

“Eas-eh, Eas-eh, Eas-eh”
Not just one of the most abhorrent chants in football, but the most unimaginative occurrences in football. The chant is derived from the undoubtedly entertaining Soccer AM and the initially amusing sketch featuring two wrestlers. The victory chant has, unfortunately, been adopted by all football fans who are too young to be suffering from severe hangovers on Saturday mornings (i.e. under 12’s) and the most witless of adult fans who can barely keep their arms out-stretched and clapping as they chant this moronic mantra, due to their sheer joy at the opportunity to do it and the gut-wrenching guffawing they are stifling behind their shouts. However, although the real fans (and, one would now hope, the likes of Tim Lovejoy) will often look on with a feeling of embarrassment – they can feel a strange appreciation of what is being attempted in this most blatant of mocking acts, however wrong and sad it looks.

It is essential that the modern fan retains this love affair with the classic chant and continues to apply surprisingly well judged wit to new and opportunist verse, to ensure that the fans have something to concentrate on and enjoy. This is especially true when the match you’ve paid an exorbitant amount of money to watch is utter shite, it turns out none of the cheerleaders would be ‘worth one’ and the fat twat has somehow managed to dribble a ball round 4 deckchairs and tap the ball past a hapless mascot in twice the time you’d manage it and win an all-expenses paid trip to the Seychelles.

Ollie.
Posted by FootballClichés at 09:41

A classic example of hastily-put -together football fan wit. Excellent.