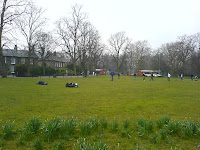 One of the main effects of cliche is that it maintains certain opinions, however misguided. In a football context, the autopilot observations offered up week after week by commentators, co-commentators and pundits are absorbed by the sponges that many football fans have for brains. Many of these opinions are outdated, inaccurate or exaggerated. Some are downright wrong...

1. Hitting the Post/Bar is "Unlucky".
The objective of the sport is to force the ball within the 8ft x 8yd rectangle. The size of a standard goalframe should be familiar to us all. The goal does not move during the match, and is not subject to any sort of random and unpredictable external force.

One can understand how a shot hitting the post or bar could be regarded as more dramatic than a shot that misses the goalframe completely - after all, the ball is back in play and there is little time to immediately reflect on what has just happened. However, under no circumstances should it possibly be considered unlucky. A shot that hits the post or bar is simply slightly better than a shot that misses the goal, and worse than one that actually goes in. It is not unlucky, and certainly not "desperately unlucky". Furthermore, if a team happens to hit the woodwork on more than one occasion during a match in which they fail to score, their fans, manager and players have no moral or logical justification to "bemoan their luck".

There is absolutely no reason why a shot that misses the goal by an inch is unluckier than one that flies high, wide and [not at all] handsome. Better, yes. Closer, certainly. But not bloody unlucky.

The only exception to this rule occurs during informal games between schoolchildren. Often denied the luxury of actual goalposts, they are forced to use jumpers, coats and rucksacks. Very often, the participants are faced with the moral quandary of the ball going over the post. The attacking team will inevitably claim that the ball "would have gone in off the post". The defending team will proceed to forensically reconstruct the shot in question, and demonstrate that it would have rebounded back into play. The debate has a common resolution - the two teams simply keep their own score forthwith. However, the issue continues to rear its ugly head whenever someone is brave enough to shout out loud the current "scoreline".

The point being made here is that, given the random allocation of scary bigger boys to either side in such games, it is only in these circumstances that a shot that hits the post can be considered unlucky. Until FIFA dispenses with goalposts and decrees that a panel of teenage ne'er-do-well bullies will rule whether or not a shot has gone in, a shot that hits the woodwork is never unlucky. It's simply not good enough to go in. Oh, erm, unless it's hit too well.

It's hard to know where to start here.

3. Away Goals Count Double.
The Angle... are a fairly intolerant bunch, so anything that confuses or alienates the football ignoramuses is usually fairly acceptable. However, the frequent assertion that "away goals count double" must not pass unchecked. Away goals, especially in Europe, are all-important, precious and even vital, but they do not literally count double. Winning 3-0 away from home in the first leg, for example, does not put your team 6-0 up on aggregate.

4. Forgettable Player Ages.
Co-commentators, to go with all their other faults, appear to have memory problems. Despite young players having their ages measured right down to the unit of days when they make their debut for club or country, and then being labelled with adjectives such as "starlet", "wunderkind" and "precocious talent", their age tends to momentarily escape co-commentators whenever these youngsters have a bad game. A common target for this peculiar amnesia is Wayne Rooney, who, people tend to forget, is still only 21 years of age.

5. "Their goalkeeper doesn't fancy it".
As we all know, Continental goalkeepers invariably elect to punch. During coverage of European games, the co-commentator is primed to pounce upon any hint of a flap by the foreign goalkeeper. Once the flap is identified, the English team will be advised to test him out by pumping balls into the box. The co-commentator will react strangely silently to the goalkeeper comfortably dealing with the ensuing aerial onslaught, because it is not in the co-commentator's remit to backtrack. Heaven forbid.

6. "The crowd are getting impatient, and that can transmit itself to the players."
I am desperate for a professional footballer's view on this. Does the mood of the crowd really transmit itself to the players? Another classic example of an opinion that is floating around the otherwise vacant brain of the co-commentator, who is just itching to use it, no matter how untrue it is. It usually appears when a stray pass is met with an understandable collective sigh of anguish from the home support. Why that should be of any significance is bewildering, but yet it provides the cue for the co-commentator to treat us to his fascinating psychological hypothesis.

The tiredness of a cliche is directly proportional to its predictability. Believe me, this one is right up there with the worst of them.

7. "They could, and perhaps should, be 3-1 up"
This one firstly needs careful explanation before its stupidity becomes clear. Let's say Portsmouth are playing Aston Villa. Villa take an early lead, but Portsmouth pile on the pressure. They miss three gilt-edged chances to equalise.

"Portsmouth could, and perhaps should, be 3-1 up."

No, they couldn't, and perhaps shouldn't. Because, Mr Co-Commentator, if any of those chances had been converted, it would be 1-1, Villa would have kicked off, the ball would thus be in a completely different place, and it's highly unlikely that the other exact same two chances would have happened. Portsmouth might go on to create two more golden chances, but you couldn't possibly know that.

This lack of logical thinking is also applied to individual players, who "could have had a hat-trick today."

So, if you hear any of these seven nonsensical statements on the BBC, Sky or Premiership Plus this weekend, don't hesitate in letting everyone around you know about it. The crusade against such ridiculous accepted wisdom starts here.

Adam.
Posted by FootballClichés at 09:28

good one. how about he almost hit it too well

Yes, Meera. In fact, we wrote an entire article on that very subject back in February!