The Angle...  investigates the intricate workings of the two-legged cup tie:

The Draw.
The most significant issue when two teams are drawn together to play a two-legged cup tie is who plays at home first. Teams generally prefer to be at home in the second leg. Boring statistics apparently back this up. Football supporters will pin their hopes on the second leg, where they hope their side will finish the job.

The home team in the first leg face a difficult proposition - the visitors are likely to set their stall out, but will be on the lookout for that all-important away goal to take back to the return leg. As we described briefly yesterday, away goals can be crucial, vital and precious. Woe betides anyone who believes that they literally count double, however. Snatching an away goal in the first leg, especially in a smash-and-grab raid, lends a sense of exciting criminality to an away win. Alternatively, if a team that is 3-0 down manages to snatch a late away goal in the 1st leg, it will be regarded as a glimmer of hope - in football matters, hope only ever manifests itself in glimmers. Rays of hope are surprisingly rare.

The final whistle in the first leg heralds the virtual "half-time" in the tie (and, furthermore, half-time in the first leg will be pointlessly signposted as being a "quarter of the way through this tie"). Co-commentators and pundits will be asked which manager will be the happier with the result. Just in case any aspiring pundits or co-commentators are reading, here is a cut-out-and-keep guide to who is happier with a 1st leg result: 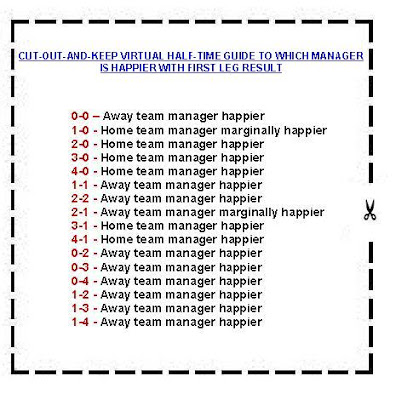 A good first leg result can virtually book a place in the next round, making the second leg academic or a mere formality, and setting up a mouthwatering clash with the next opponents. Not that the manager or players will allow themselves to tell the media that, of course - the tie isn't over and there is still a job to do, so they won't be "getting carried away", let alone "thinking about the next round". Conversely, a catastrophic first-leg performance can leave a team with a Herculean task or a mountain to climb in the return fixture. No particular mountain, even Everest, is ever offered as an analogy here.

Neither of these circumstances is great for the TV hype machine though. What Sky and ITV love most is a tie that is too close to call after a tense first leg. Perfectly (or even beautifully) poised, often on a knife-edge, such ties allow the broadcasters to beef up their opening montages for the coverage of the second leg.

The 2nd Leg.Endless previewing and build-up leaves no-one unsure about the state of play going into the second leg. Any team that has any sort of deficit to peg back is advised to get an early goal. Any goal that is scored within the opening twenty minutes can be considered early, which is probably why the first 20 minutes are always considered crucial in these circumstances. In these first 20 minutes, teams must be expected to make a bright start. Bright starts are usually heralded by the commentator, but have arguably been cheapened in recent years. Once upon a time, an early goal was the prerequisite for a bright start. Now, in an era in which Soccer Saturday demands analysis from its pundits only seconds after kick-off, a bright start can often be achieved by merely winning a throw-in in the opponent's half. Nevertheless, a team attempting to reduce an aggregate deficit must make a bright start. A goal in the first 20 minutes serves to get the crowd going, particularly on a special European night. Such a match is a very good time for a striker to score a quickfire brace or, even better, an x-minute hat-trick.

Teams seeking to protect an aggregate lead will aim to put in a professional performance. One of football's finest euphemisms, a professional performance simply means playing out the ninety minutes with as little bother as possible. Alternatively, they may seek to step up a gear to put the tie out of reach of the opposition. The cautious probing, so characteristic of first leg matches, gives way to throwing caution to the wind and going for the jugular. In such dynamic circumstances, it is not rare to find the tie swinging dramatically between the two teams, as the second leg ebbs and flows. The excitement of a cup tie is often rubber-stamped when the co-commentator reveals that "we've got a genuine cup tie on our hands now." Commentators have the unenviable additional task of keeping track of the various permutations of the aggregate score. They will always be on hand to let us know the point at which the scorelines means "this cannot now go to extra time or penalties". Late goals can provide dramatic climaxes and heartbreak. Analysts will look back on pivotal moments with smug hindsight, while teams going out of the competition will be left to rue missed chances.

The relative complexities of two-legged ties mean that they are a rich source of cliches, as commentators, co-commentators and pundits seek desperately to provide mindnumbingly inane analysis.

Unfortunately, it also means we endure twice as much of it.

Adam.
Posted by FootballClichés at 17:25

There was a well-reviewed book out a few years ago called the Football Lexicon which was a humorous collection of the most popular football cliches.

I don't know if this is where you got your *ahem* inspiration from, but it's a well-worn and seemingly infinite area to exploit.

Maybe rather than spunking half a million a year on Gabby Roslin, the BBC could program a computer robot with these cliches, and punch it at appropriate moments at half and full time. The robot would also have the bonus of being more charismatic than Gavin Peacock.

We're well aware of the Football Lexicon. Although I'm completely unable to prove it, I came up with the idea long before it was published. We realise we will cover much of the same ground as that book does, but our approach is (and will be) different. The Football Lexicon was simply a glossary of football cliches. Admittedly, some of their superb observations are absolutely bang on, but the subject can definitely be investigated in more depth.

Furthermore, one book hardly makes the subject well-worn, does it? The lack of self-awareness that is still displayed by the commentators, co-commentators, pundits, presenters, touchline reporters, managers and players when using these cliches suggests that the subject hasn't been exposed anywhere near enough.

I can't believe your 'cut out and keep virtual half time guide to which manager is happier with first leg result' didn't have '3-2' on it. How on earth am I to determine whether Ancelotti or Ferguson is the happier of the two?!

It was quite an oversight, Mr Anonymous. Let The Angle take this opportunity to clarify that, at 3-2, Ancelotti is obliged to be marginally happier with the result, even more than he would have been at, say, 2-1.

Furthermore, he may even have "settled for it" before kick-off. In fact, The Angle proposes that all games should now be decided by this process. Whichever manager "settles for" the better result before kick-off wins the game. If their results match, the game must be played. We think it would save a whole lot of bother.

I agree that Ancelotti would be marginally happier than ferguson. I do think he would be disappointed to concede a goal so late on in the game but can take two goals back to the San Siro and yes, he would've settled for that score before the match.

However, at half time it could be argued that Ferguson would also have 'settled' for that score and would've been disappointed to concede twice before half time.

But yes, Ancelloti is no doubt the happier manager. Thank you for clarifying.