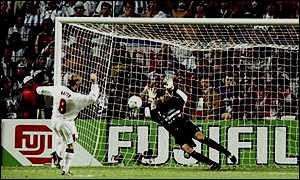 Penalty shoot-outs, we are told, are a cruel way of deciding a contest. In the lottery of a penalty shoot-out, the goalkeeper has nothing to lose in his quest to become a hero - unlike the unfortunate fools who fail to score from 12 yards, often because their shot is at a good height for the goalkeeper. The drama of penalties is based on its unpredictability, the fact that it can go either way. Well, The Angle... can conclusively address this unpredictability, and argues that it's actually rather predictable after all...

Right-backs
Rivals the defensive midfielder as someone you really don't want taking a penalty for your side in a shoot-out. Right-backs tend to be solid and dependable in open play, but lack the finesse and cultured delivery of their left-sided counterparts, which is why a left-back taking a penalty is far more acceptable.

Old-Fashioned English Centre-Halves
Unlikely to score for two reasons. Firstly, the old-fashioned English centre-half may attempt the no-nonsense smash down the middle. This often results in the penalty being blazed over the bar, or crashing against it. Alternatively, they may try a more conventional penalty. This weak effort is comfortably saved by the goalkeeper, who will know that such a routine save will still be hailed as heroics.

Short Run-Ups
A cardinal sin. Unless the penalty taker really, really knows what he's doing, a short run-up is almost guaranteed to fail. The sight of any player putting the ball down confidently, only to take a couple of steps back from it, is beyond nerve-jangling. In an era where minimal backlift is rife, many players feel they are capable of propelling the ball into the net with only a short run-up. Many, many fail.

Overlong Run-Ups
Yes, run-ups can also be too lengthy. The reason for this is less clear-cut than the short run-up, but one explanation is that the player concerned attempts to overcompensate for his nerves by trying to appear confident. By striding purposefully from the ball, they find themselves beyond the 18-yard line. This is too far.

Turning Quickly
The act of spinning 180 degrees, after placing the ball down and walking back, in order to try and catch the goalkeeper by surprise. The method of choice for rotund 80's striker Micky Quinn, who was fat, round and scored at every ground. Otherwise, any other player attempting this has clearly let the nerves get to him, and will probably miss.

Penalty shoot-outs are one set of circumstances in which hindsight is an acceptable source of wisdom for supporters. Claiming that "I knew he was going to miss" is very rarely challenged by your peers. Similarly, announcing that a player will miss before he has even reached the penalty area, possibly in some desperate attempt to cast some sort of reverse jinx, is just about tolerated.

So, have this guide handy when your team are next involved in a penalty shoot-out. It will still rip your heart out when they lose, but at least you can say you saw it coming.

Adam
(who may just have got it out of his system now...)
Posted by FootballClichés at 09:09

In a more general context than penalties, you never hear of a right-back with a cultured right foot, or a rocket of a right foot, do you?