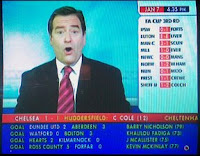 A rare and almost forgotten art is still practised in this country today. I’m not talking about maypole dancing or basket-weaving. I’m talking about the epic undertaking that is avoiding the scores. It may be that you are unable to follow your team’s progress on a Saturday afternoon, due to some sort of sudden and unforeseen incapacitating accident; or that your wife has dragged you off to the shops by pain of death…or that you just want to run a masochistic gauntlet by hiding from all forms of media and physical and verbal contact with any other human being - for seven long hours.

The practice was made famous by the classic 1973 episode of Whatever Happened To The Likely Lads called ‘No Hiding Place’, in which Bob and Terry spend all day trying to avoid learning the score of the Bulgaria v England football match, in order to watch the televised highlights that evening. Despite exhaustive attempts to avoid the result - and a malevolent bloke from the pub intent on making it as difficult as possible for them - they manage it, only to find the game is abandoned due to flooding as they grapple with the possibilities of a snatched glance at a headline beginning with “England F…”. Cult viewing at its finest.

For all those that attempt this task, there is a set of simple rules that will determine whether you succeed and sit down in front of the Match of the Day credits with a smug, excited grin or if you end up swinging for your girlfriend as she chooses that exact day to give a shit about YOUR ‘hobby’ and gleefully tells you that your team has just conceded a fourth at home to Wigan.

Plan.This is as close as you’re likely to get to the magnitude of planning the perfect murder or a military assault on a small Central American country. You must work out the environment that you must survive in for the next 7+ hours between kick-off and the MotD credits. If you are leaving the house, then expect the unexpected and prepare for:

- Any groups of two or more males above the age of 4, or singles talking into their mobiles

- Women. Often considered harmless, but in the same breath can be your downfall (look for the tell-tale club scarf for most over-enthusiastic female supporters)

If you are staying in, avoid all television and radio channels with any kind of news update or sporting connection. Magic FM and The Fashion Channel are thus highly recommended. With all forms of media blanketed there really is only one possible enemy left: everyone you know.

WARN/IGNORE EVERYONEThere are two ways of handling your friends, family and girlfriend/wife in this situation: warn them and then ignore them. If you choose to text them all, or start every conversation with a speedily-delivered mantra “I’m avoiding the scores, so don’t tell me anything”, then be prepared for the mischievous (or perhaps even plain stupid) mate to haunt you throughout your difficult hours.

TRUST NO-ONEThe most dedicated Score Avoiders will turn their phone off. A phone call or especially a text message during the 90 minutes will cause you to speculate wildly about its meaning, but at the end of the day you know that text is not going to say “I’m so pleased for you that your centre-back has just scored from 30 yards to make it 3-0 for your lot”. Texts = bad news. To make absolutely sure, it is also worthwhile making absolutely no eye-contact with anyone, however harmless you think they might be. Many a time has my girlfriend revealed the exact details of a thumping defeat with a momentary look of concern, after she overheard some bloke on the bus laughing heartily at your team’s misfortune.

STICK TO THE BBCITV and Sky generally don’t get it. The BBC became the first true ally in the war against knowing the scores when the sports newsreader first began to utter the famous words “…and for those who don’t want to know the scores, look away now”. Unfortunately, even this unique empathy with the die-hard Score Avoider has been tarnished recently by the need to actually read out the scores – probably to benefit the moaning blind people who can’t watch Match of the Day. Bastards. However the addition of “...and put your hands over your ears” in the newsreaders’ warnings has led to visions of grown men across the country sat on their sofas with their fingers in their ears, eyes clamped shut, singing “LA LA LA LA LA LA LA LA” for far longer than necessary. If you’ve made it this far – well done. But you’re not out of the woods yet.

BE PREPARED TO BE DISAPPOINTEDFor some unknown reason, certain football highlights programmes have little faith in the abilities of the Score Avoider, or perhaps simply don’t care. Creeping into these shows, particularly on those that are contractually bound to show advert breaks, are often flashed highlights of the day's play – often including, criminally, the goals. Someone has to tell them that the use of an obscure camera angle does not hide the fact that the fans behind the goal are going ballistic. A truly sad attempt to maintain viewer interest by suggesting “Yes! There was at least one goal today! What an exciting programme it will be!”. Then there are the studio presenters and pundits who are desperately trying to hide their emotions and remain as poker-faced as possible, while your eyes flicker across Hansen’s face in the vain hope he’ll reveal something about West Ham's leaky defence.

You find yourself at the unpredictable mercy of the commentator and the programme’s editor. Recently, the commentator on Ford Football Special decided to reveal at the start of highlights of the recent crucial Watford v Wigan relegation battle that “Watford don’t have a keeper on the bench tonight”. Good thing that Ben Foster didn’t get injured then….oh.

Then, there is the dreaded Yellow Card Highlight. Any prolonged footage, complete with graphic confirmation of a player getting booked in a highlighted game - can mean only one thing. It is similar to the beginning of an episode of Casualty. That talismanic defender, crucial to your side’s survival in the top-flight, might as well be climbing his roof to fix his aerial during an electrical storm. He’s in it. And he’s going to get sent off. Don't be fooled by the commentator saying "he's got to be careful now" and is "walking the disciplinary tightrope", because he is absolutely guaranteed to fall off the disciplinary tightrope.

There is, of course, one final spanner in the works that is never likely to be a flooded-out England game. It’s simply your own team. On MotD last. Drawing 0-0. Nothing on this earth can prepare you for this disappointment. The thing is – you know that you caused it.

I spent the whole of Sunday trying to avoid the score of the Carling Cup final before the ITV highlights at 11:15. As I play football Sunday evening, this involved texting everyone and telling them not to talk about it, and running away from every conversation that sounded like it might be related to football. I successfully got home at 10:30, walked past the room where the BBC's MOTD2 was on, just in time to hear Adrian Chiles say 'The Carling Cup was today, it ended 2-1 to Chelsea'.

Even better was the ITV News before the highlights came on. Careful not to give away the score, they just showed the Terry incident and the "brawl" at the end. Unfortunately, none of the bright sparks at ITV realised that the score was in full view in the corner of the screen.

Brilliant article. Loved the Yellow Card Highlight. My bugbear is the "and there were goals galore in the other games played today..." line. The featured matches are always illustrated by a near-miss. The "other games" are illustrated with one of the "goals galore". Fine. Unless the illustrative goal galore happens to be from the game your team took part in.

And your eyes immediately turn to the reaction of the player guilty of the near-miss (and the fans behind the goal) to try and desperately summise what the score must have been at the time!

just spent all of sunday avoiding the carling cup final score only for motd2 and adrien chiles to ruin my day without warning...

just spent all of sunday avoiding the carling cup final score only for motd2 and adrien chiles to ruin my day without warning...

2 years on, and they are still at it!