The Science Of, If Anything, Hitting The Ball Almost TOO Well.


Football has always seemed to have a problem with upper limits.

Many have noted footballers' reluctance to be restricted by the draconian percentage system, choosing to declare their desire for 110%. Logic renders this impossible, of course, but its sentiment is understandable and ingrained in the fabric of the football cliche tapestry. Players, managers and supporters all agree that, at the very least, they want to see the full quotient of effort, grit and determination.

A less well-established paradox exists, however. Borne out of the advent of the slow-motion replay, it represents possibly the most nonsensical statement a co-commentator can make (for it is he, rather than the commentator, who is most often guilty of its use). It appears frequently, and as follows:

"If anything, he almost hit that too well."

First, let's take a moment to reflect on what this means, or is intended to mean. Years of experience tells us that shots that are if anything, almost hit too well are heavily characterised. They must be struck powerfully and must miss the goalframe (either to the side or above) by only a matter of inches (millimetres are also acceptable, if a little overzealous in their precision. Curiously, however, centimetres are very rarely called upon as units of expressing the proximity of a shot to the goal. There is, as yet, no clear rationale for this.)

So, a powerful shot that narrowly misses the target is classified as if anything, almost hit too well.

The significance of the "if anything" portion is questionable. It could be regarded as a good indication of the assumed obligation for a co-commentator to provide a verbal backdrop to all slow-motion replays. Quite literally, the co-commentator seems to be telling us: "Look, I've got to say something here. Erm...how about this?". Admitting that there is nothing of note to be said would be tantamount to resignation for the co-commentator, and is a dangerous taboo equal to dead air on the radio. So, there must therefore be something - anything. If this isn't enough, a second qualifier appears in the form of "almost". Similar to the phrases highlighted in The Angle's previous feature, this is a classic non-committal by the co-commentator. Furthermore, it could be argued that it demonstrates that even the most vacant-minded co-commentator suddenly realises the absurdity of "if anything, he almost hit that too well", and attempts to distance himself from his opinion, before he's even revealed it.

So far, so wishy-washy. The co-commentator has already warned us, early doors, that the imminent observation isn't going to be particularly valuable. But now he's telling us that, in addition, he's not really confident that it's entirely true. This does not bode well.

And so, on to the crux of the matter. How exactly can a shot be if anything, hit almost too well? Surely, the more "well" a shot is struck, the greater the likelihood of it resulting in a goal? To begin to deconstruct this nonsense and find some logic deep within, we must start from the very bottom - a shot not hit at all well. Assuming that complete airshots don't count (they aren't, despite their name, actual shots after all), the least "well" a shot can be hit, The Angle... would argue, is to scuff it. The full range of how "well" a shot can be hit can be graphically represented thus: 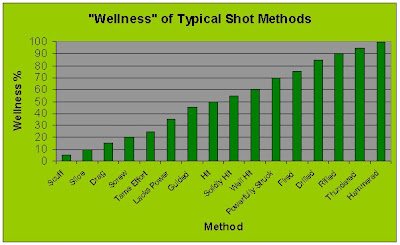 So, the most "well" a shot can be struck is, in our estimation, for it to be hammered. Any more than this, and a distinct ceiling is reached: 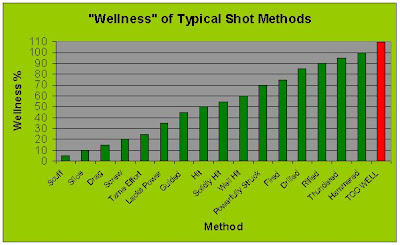 It can be concluded that the statement strongly relates to the excessive power of the shot in question, to the detriment of precision and placement. Occasionally, the viewer/listener is treated to the clarification that the player "went for power over placement", although this is usually the case only with penalty kicks. A shot that is hit almost too well will always have an impressively pure trajectory as it whistles past the post or is blazed over the bar, but ultimately suffers from its excessive wellness.

So that is how, and indeed why, a shot is said to, if anything, be hit almost too well. Interestingly, it would appear to be one aspect of the game of which a manager should be careful not to demand 110% from his players - otherwise Row Z would be kept rather busy.

For a classic example of a shot being hit almost too well, look no further than this speculative effort from 1994...

Who gives a fuck what you think about anything? You terminally dull, self-important twat.

It's possible, I think, to regard a striker hitting a ball "too well" as the footballing equivalent of Spinal Tap. Hitting a ball too well is obviously akin to turning the amps up to 11.

Gonna disagree on where a shot hit "almost too well" ends up. This is almost never used for shots blazed over the bar, but only for ones missing the post either side and normally high up towards the joint of post and bar.....

What about when a shot hit 'almost too well' is fired straight at the keeper?

The ball is whipped across the box, the striker makes 'perfect' contact, and hammers it straight at the opposition 'keeper...

I'd say that is the true definition!

I died when I got to the graphs. Well done