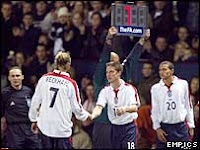 At some point this week, a football supporter will wonder out loud, to his friends: "are we playing this weekend?" The answer he receives is enough to chill the blood of any normal human being:

I know some people get rather excited about England games - people looking to get a bit of trumpet practice in before their Grade 1 exam, perhaps - but there are also people who get rather excited about the music of Cliff Richard, so let's not allow the feelings of the insane get in the way. Some followers of lower-league clubs relish the opportunity to support the likes of Lampard and Rooney guilt-free, but even they will be hoping their Northern Irish Under-21 centre-half returns from Turkmenistan unscathed. Further up the league pyramid, however, fans of Manchester United and Chelsea are already eagerly eyeing up the next round of Premiership fixtures.

The people that would seem to care most about these games are the media - and they care a lot. Temporarily freed from their roles as transfer rumour-mongers, it is time for the press pack to actually do something and change the world. Or, more likely, to give the England manager a hard time, boss him about a bit and, ultimately, try to get him sacked. In the face of such tedious sniping, it has nowdays become increasingly difficult to distinguish between supporters' genuine discontent with the England team and mere boredom with international friendlies in general.

They won't go away, though, so here is The Angle's Rough Guide to the International Friendly:

The squad is announced. Six players immediately withdraw, some having conveniently limped off in the 87th minute at Old Trafford earlier that day*. McClaren describes this as "a blow", but vows "to experiment" nonetheless. Phil Neville is "drafted into the squad as cover".

England captain John Terry is first to face the press conference, understandably going through the motions. Declaring that the "spirit in the camp" is good, Terry explains how much of an honour it is for these "quality players" to "pull on the England shirt". Steven Gerrard, the media's darling, is next. Of course he can play with Lampard, he says, unconvincingly. He likes playing central-midfield, but will give 100% on the right side, "if selected". In fact, he will play anywhere he is asked to - even in goal. The press find this hilarious and lap it up.

The customary new face in the England squad (someone "young and exciting", who probably got a montage on Match of the Day the previous week) is asked about the moment he got the call to report for international duty for the first time. This is the traditional initiation ritual for a potential international debutant. He passes with flying colours - by reciting the age-old tale of how he "thought it was a wind-up at first". Again, a small ripple of laughter ensues amongst the gathered hacks.

The BBC, reflecting the passion of the nation before this fascinating encounter, begin their coverage ten minutes before kick-off. We are immediately presented with:

- Alan Hansen looking bored
- Alan Shearer rabble-rousing half-heartedly and using his vast experience as a top pro to produce insights like "we all want to see a decent performance". Shearer, much like ITV's Andy Townsend, has developed a tendency to continuously point towards the pitch behind him, adopting a patented thumb-over-the-shoulder technique.
-Ian Wright, to his credit, delighting thr BBC execs by describing the match as "muggy" and "two-bob".

Hansen is briefly roused from his stupor of indifference by a montage of Michael Carrick's "qualities". The "anchor role in midfield" has seemingly joined the perennial left-sided problem, climate change and the war on terror as worrying (if now rather passé) issues.

John Motson, apart from the foam-finger-waving schoolchildren admitted at a discount, is the only spectator in the country who is genuinely excited by the prospect of the next ninety minutes. Lawrenson successfuly tempers this with near Hansen-esque apathy.

Twenty minutes pass. Come on, admit it. Sometimes you just think it would be better if the opposition scored. San Marino after 9 seconds, Macedonia from a corner - these are the guilty pleasures of international football. Even with such illustrious opponents as Spain turning up next weekend, we will be able to revel in the mediocrity of it all.

The remedial trumpet players don't lose gusto. Hell is the Official England Supporters Band performing their hit parade of "England 'Til I Die", "The Great Escape" and, most nauseating of all, "Come on England", the musical equivalent of being forced to watch Frank Lampard line up the same free-kick over and over again. Fortunately, the unofficial England band - the adolescent airhorn-blowers - lose enthusiasm and tail off eventually.

Attention switches to the visitors. Despite every Premiership game being filmed from every angle and beamed around the world, commentators will deem it necessary to identify a cunning foreign spy in the opposition ranks, who "plies his trade in English football" and can give his manager the "lowdown" of the world-famous England team.

We return to the studio and Gary Lineker, who looks suitably and justifiably embarrassed to be associated with this rubbish. The pundits have that look on their faces that suggests they'd rather be at home watching The Bill. Ian Wright will blame Sven. It's football's equivalent of anti-Blair rhetoric - lazy, but a safe bet. The second Michael Carrick montage will be played, and will probably be used again as the pre-match Michael Carrick montage for the next friendly. Lineker sends us to Cardiff for highlights of the Wales game. John Toshack's Giggs-less side are 3-0 down, in a half-empty Millennium Stadium, to an East European nation that didn't even exist 4 months ago.

Desperate to find something to talk about from the first half, the pundits analyse a half-chance for England on the stroke of half-time. It will be referred to as England's one "bright spot in the first half".

The raft of subsitutions begin. This is apparently evidence of the manager's "experiment", which appears to be to field a side least likely to ever play with each other again. Despite their suppressive effect on the game as a spectacle, supporters don't really mind seeing their club's prize assets leaving the field to be replaced by bright-eyed Portsmouth and Reading one-cap wonders. Debutants are forced to play in a position they may have played once or twice before in their careers, as they are shoehorned into the chaotic second-half line-up. Of course, it will be a complete mystery why their England careers failed to take off.

The main effect of these subsititutions, as the co-commentator is allowed to mention in his tirade, is that they cause the game to "peter out" to become more like a "training game". England appoint their ninth new captain in the space of 78 minutes, as England's eternal second-half substitute Jamie Carragher takes the armband. He will not necessarily be required to point and shout in a captainly manner.

Back to the studio once more, and the tired analysis begins again. One of the debutants' performances is examined. A montage of basic heading, tackling, passing and shooting skills leads his display to be hailed as "assured". At some point, reference will be made to "stepping up to International level". Generally accepted to be a "big ask", it requires established Premiership players who share a pitch with the likes of Ronaldo, Drogba and Henry each week to adapt to sharing a pitch with the likes of Marcus Schopp, Marc Bernaus and Szabolcs Huszti. No, neither do I.

Then, the moment we've all been dreading (if you haven't turned off your TV at the final whistle, anyway) - Garth Crooks interviewing Steve McClaren. McClaren tells us that he has "taken a lot of positives" from the match, while not actually going into too much detail about what those "positives" are. The general consensus is that the performance was more important than the result (unless we win, obviously).

Back to the studio: "So, what have we learnt?".

*Since Wales captain Ryan Giggs made his debut in June 1991, his country have played 112 full internationals. Giggs, arguably their greatest ever player, has taken part in 60 of those. That's a pathetic 54%.

Spot on mate.....when will we get back to looking forward to and even enjoying an England game?
*sigh*
Just lay off Wales though - Land of my Fathers....and not as bad as that!

As for Wales - Slovakia, Georgia and Moldova (to name but a few in recent years) may beg to differ!