The idea that football supporters are left in a desperate limbo between the final day of the season and the day that the fixture list is published is a rather outdated one. Thanks mainly to outlets such as the ravenous gossip-mongers at Sky Sports News and the bored wind-up merchants at Football365, we are kept afloat by a constant stream of transfer talk.
We are informed of managers being given war chests by their new foreign billionaire supremos, which they are free to squander on whichever player catches the eye at that summer's international tournament. Vast sums change hands across the Continent in high-profile deals, all of which are vying for the honour of being the Transfer Saga of the Summer (protracted or otherwise). Managers of perennial underachievers are expected to perform a clear-out each summer, in order to strengthen their underachieving squad to the point where they are tipped to challenge in the forthcoming season. This freshly-heightened expectation thus allows the squad to underachieve once more. The knee-jerk nature of many signings made during the close season is clear, but it is a situation not helped by the fans. Even the most cynical supporter gets a buzz of excitement when his beloved club unveils their latest recruit. Those who are yet to see their club dip into the transfer market as July approaches can be heard to pray for their club to sign "someone".
The sheer number of transfers that occur during these hectic twelve weeks or so mean that some simply go unnoticed. Whilst all eyes are trained on the Carlos Tevez saga (A saga that promises to be the absolute godfather of all Protracted Transfer Sagas), Trevor Sinclair will quietly put pen to paper at Cardiff, Leeds United stalwart Gary Kelly will jump the sinking ship to hang up his boots, and England international Michael Ricketts will continue his inexorable downward career spiral by joining Oldham Athletic.
Eventually, come mid-July, new-look squads up and down the country hit the pre-season trail. New signings, looking distinctly unfamiliar in their new club's shiny new third kit, stroll through their debuts against Conference (sorry, Blue Square Premier) opposition. Those at higher-profile clubs see their first appearance come against a local Chinese side, as part of their ambitious employer's attempt to tap into the lucrative Far East market. Of course, this isn't their proper debut, but it's an easy ride nonetheless. A new signing (particularly a more expensive one, strangely) cannot really do too much wrong on his pre-season "debut". Unless he gets sent-off or scores a hat-trick of own goals, the player will be said to have shown "some good touches". Sky Sports News will inevitably acquire footage of these good touches.
Year upon year of the transfer free-for-all means that, in the eyes of some supporters (if not the managers and chairmen), some transfers are doomed to total failure. One such signing is that of Rolando Bianchi by Manchester City. For a fee of almost NINE MILLION POUNDS. The Angle... suggests that a good rule of thumb in the labyrinth of the summer transfer market is to avoid signing a player nobody has ever heard of for £9m. Sven, it'll all end in tears -cue Ceefax:
No. 3: January 2008 - Rolando Bianchi is put out of his Premiership misery. 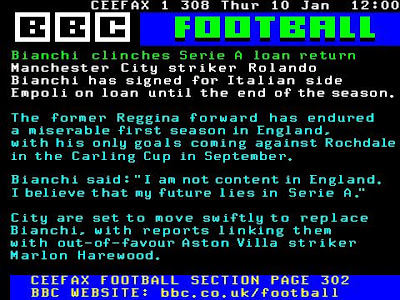 Starved of club football for a quarter of a year, supporters attempt to extract as much significance as they can from their club's pre-season friendly results, despite assurances from the manager that "at this stage, it's more about the performance than the result." Confused fans wonder if the "XI" side they see listed on the Ceefax fixtures page is work keeping tabs on, while scouring the forum on their club's website for the link to a legally-dubious internet feed of the first team squad's latest match of their Far East tour. Despite their similar curiosity, supporters of the Premiership's more mediocre teams are too wise to get carried way by their team's 12-0 win over some Swedish postmen, plumbers and milkmen, as they begin their Scandinavian tour.
Of course, no pre-season is complete without a red card controversy, where clubs and fans alike are curiously outraged that one of their players gets suspended from the start of the league season after being given his marching orders in the final warm-up match.
While television manages to occupy the airwaves with tedious pre-season rumours, newspapers are faced with a similar task. An effective way of filling the void is a good old club-by-club feature. Club-by-club features crop up at least twice during the close season. The first instance occurs at the height of the summer transfer chaos, where each club's ins, outs and shakeitallabouts are listed in minute detail. It is at this point, if a club's arrivals are summarised by the word "none", that fans are seen to become frustrated at their club's lack of transfer activity. The traditional response from the chairman or manager is to assure the fans that they are "working hard behind the scenes". Over-eager club representatives may even let slip to the masses that the club are "looking to bring in four or five" transfer targets.
As the new season approaches, the second type of club-by-club feature will appear. Providing a forensic rundown of each club's hopes for the next nine months, these features even go as far as to predict the entire final Premiership table for May. The relegation candidates are rarely a surprise, but the speculative forecasts for the top of the table usually just involve the feature writer tipping Liverpool to finally put together a title challenge. Elsewhere in the table, you sense that the predicted midtable positions of Blackburn, Everton and Middesbrough et al are simply cobbled together.
Here we go again.
Adam.
Posted by FootballClichés at 14:12 3 comments: