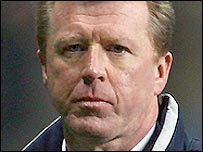 As the qualifying campaigns for Euro 2008 come to an end, the media like to keep us updated with the Home Nations' chances of reaching the tournament. Apart from the endless permutations of the final games, a select set of phrases are usually sufficient to leave the fans in no doubt. As always on The Angle..., they tend to fall into a convenient scientific model. 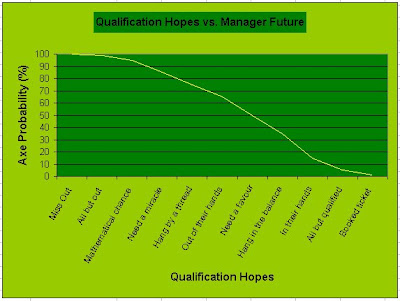 Miss Out
There are no easy games in international football, of course, so any slip-ups can result in a team missing out on a major tournament ("for the first time since....", etc). According to football media, there are only two places a footballer is allowed to be during the summer of a World Cup or European Championships year - either at the tournament, or on a beach somewhere.

All but out Needing your closest qualification rivals to lose 4-0 to San Marino while you must come from 1-0 down at half-time in Ukraine means your country is all but out. Technically correct, admittedly, but why beat about the bush? You're out.

Need a miracle
Miracles can happen, of course - that's football - but needing three goals in the last 10 minutes is a bridge too far.

Hang by a thread
Wales' qualification hopes seem to constantly hang by a thread, even before the groups are drawn. Very similar to the mid-match scenario of being in last-chance saloon, hanging by a thread merely prolongs the agony.

In/Out of their hands
Whether a team's hopes are in or out of their hands is vital. If it is still in their hands, they "know what we have to do." If they depend on results elsewhere, they "have just got to go out there and do our job".

Need a favour
Much, much more likely than a miracle, a favour is required when qualification hopes are out of your hands. Pre-match, the team in question is likely to ignore any talk of doing another team a favour.

All but qualified
Teams that have all but qualified usually just need a draw in their final game, at home to the group's minnows, to rubberstamp their entry. There may be a mathematical possibility of them failing, but that's all it is.

Booked their ticket
Also known as sealing their passage, teams can book their ticket to the host nation(s) by securing qualification, especially with ease or by cruising through.

The Angle... suggest that Steve McClaren's qualification hopes currently hang by a thread, putting his Axe Probability figure at around 78%.

Adam.
Posted by FootballClichés at 08:54 No comments:

If clothes maketh the man, what sayeth the pitchside attire about the manager? The Angle... believes that what a manager wears speaks volumes for the aspirations of the club whose fortunes they are seeking to turn around.

As always, The Angle... is on hand with a guide to pitchside attire: 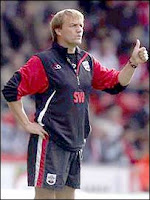 If you peer through the gloom and driving rain to the touchline, to see if there is any activity down on the bench to liven up the drab proceedings, and you see your manager wearing a sweatshirt with his initials emblazoned in the corner, I have some bad news. For, whatever the hopes and aspirations the manager set out at the beginning of the year, your team are just going to fall short.

Presumably, in a bid to be one of the boys and hold on to the past, the tracksuit wearer will try and make up for his lack of ability by becoming animated on the sideline. Sadly, the players they have bought and the tactics they employ won’t quite be good enough to make the next step.

Being a tracksuit manager is also rather thirsty work. More often than not, you will see them pacing over to the perimeter of their technical areas to clasp a Lucozade sports bottle, take an almighty swig, before placing it carefully back.

A manager in a bad suit can only mean one thing - a relegation dogfight. Favoured by natural tracksuit-wearers from the lower divisions who have been promoted to the top flight, the bad suit betrays two revealing emotions. The first is an absolute desperation to be taken seriously, in the belief that a TopMan suit, a big knotted tie and a determined look is all that is missing from his squad that was playing in the lower reaches of the Championship about 18 months previously. The second is that, despite the determined expression, he isn’t quite confident enough to go and buy an expensive number, as he will more than likely be on the dole come March. If he is lucky enough to stay up, he is also lucky that he is not David Pleat and will not be wearing the worst suit ever made as he goes scampering across the pitch to celebrate his Great Escape. 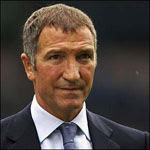 The new breed of young British managers are from the Sky-sponsored, 20-grand-a-week, post-1992 era. This means that they have plenty of well-cut, expensive suits ready to wear in yet another vain bid to be taken seriously. Graeme Souness appeared in Boys from The Blackstuff in the trademark Scouse shiny grey suit, with sleeves rolled out. Two years in and he came back with a knowledge of fine materials, tan shoes and a new, younger wife. Sadly he also signed Ali Dia - and therein lies the rub. They suffer from the belief that dressing like Capello makes you as good as him. It doesn’t.

This is the uniform that all supporters should look for when demanding a new manager. These men have experience, quality and silverware to their name. We’re thinking , Benitez, Wenger, Graham and erm, Walter Smith. Unfortunately, the rule that governs all football - thou must always do as others have done before thee - mean that this is becoming a disguise for managers whose natural habitat is either the bad suit or the tracksuit. However, The Angle... isn’t fooled, as we know who you are...

Posted by FootballClichés at 14:09 No comments: