Celebrity Referees: More Trouble Than They're Worth?

If the best referees are indeed the ones you don't see, this has been a particularly inauspicious week for officialdom. Mark Halsey's overexcited lambasting of the current crop of top-flight referees, which followed his replay-by-replay dismantling on BT Sport of the weekend's big decisions, was met with disdain from former colleague Graham Poll. The public show of disharmony within the traditionally tight-knit referees' union is remarkable, but the belligerents in this war of words are perhaps less surprising.There are frequent calls for referees to be more accountable, and to "come out and explain their decisions" after a match. Their governing body, the Professional Game Match Officials Ltd (PGMOL), are steadfast in their opposition to opening this particular can of worms, which may explain the enthusiasm with which some retired officials have taken to the media after hanging up their whistles.
Dermot Gallagher's stern appearances on Sky Sports News, Poll's newspaper columns and Halsey's BT Sport residency all had the potential to demonstrate the extreme difficulties and pressures of being a modern-day football referee, but each of them (to various degrees) has descended to cheap shots or vague "six and two threes" observations. God knows what Segar Bastard would make of it all.
The era of full-time match officials has brought with it some earnest professionalism (more on this to come), while bringing to an end quaint practices such as broadcasters mentioning a referee's home town before kick-off, apparently abandoned through fear of encouraging harassment. A shame, because the Chester-le-Streets, Trings and Orpingtons of this world deserved their brief moments of fame. Professional referees are not just expected to get decisions right, but to look deadly serious in the process. No referee can compete with the array of camera angles the broadcasters have at their disposal but, faced with a 50-50 tackle or a coming-together in the box, they have developed a strange crouch-and-squint technique which, at least, assures us all that they've really, really looked at the incident.
The wonderfully emphatic gesture of both arms swept in a scissor motion across the chest instantly relays a message of "nothing doing" as a hopeful penalty appeal is raised among players and fans. The cult spectacle of a referee pointing out various areas of the pitch to a repeat offender to justify his yellow card demonstrates the ability of the modern officials to accommodate the viewing millions as well as the twenty-two players under their jurisdiction. Things have moved on considerably from the days when their only concerns, if the Ian Campbell Folk Group were to be believed, were their "whistle, notebook and stopwatch":

At the risk of angering those who insist some referees are still star-struck by the players they officiate each week, there still appears to be room for personality among the elite referees group. Mike Dean's withering looks in the direction of hysterical players can delight or infuriate, depending on your allegiances, while Mark Clattenburg's perpetual expression of mild irritation makes you wonder how enjoyable life as a referee really is. Howard Webb has the approachable authority of a deputy headmaster, a far cry from the schoolmasterly David Elleray who, in the grand old tradition of disclosing referees' day jobs, we all know was actually a Harrow schoolmaster.


Our officials are waging a constant battle against common perceptions about what good refereeing actually is. There is a traditional proclivity, especially among TV commentators, for leniency and for a referee to "keep his cards in his pocket". Managers ask for "common sense" one moment and, without a hint of irony, bemoan a perceived lack of "consistency" the next. The referees' lack of a right of reply is glaringly exposed during the forensic post-match analysis. 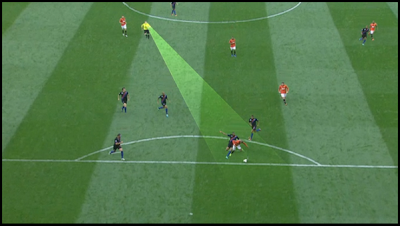 When Match of the Day resorts to freezing the action to evaluate an official's positioning for a split-second decision, complete with comic-book graphics to emphasis his line of sight, it becomes a laughably counterproductive debate.
The least forgiving, of course, are the fans - their most potent weapon is arguably the ironic cheer, a gleefully childish expression of injustice that greets a free-kick in their favour after a string of decisions the other way. The man in the middle, at least, can distance himself from the baying hordes. Not so the fourth official, whose matchday tasks include enforcing the dimensions of the technical area, fielding futile grievances from under-pressure managers, and trying to think of a brief quip to share with the next substitute who waits to enter the fray. Spare a thought also for UEFA's well-prepared goal-line officials who, because they don't wave a fluorescent flag, have their very existence questioned by ignorant co-commentators on a midweekly basis.
On the evidence of Halsey and Poll's tête-à-tête this week, there is little sympathy for attention-seekers among the refereeing fraternity. While an inside view on the unique demands of officiating top-level football should be encouraged, it seems their careers spent sheltered from the media spotlight have done them no favours when they find themselves stranded outside their comfort zones on our TV screens.
Posted by FootballClichés at 14:18 1 comment: