Posted by FootballClichés at 21:34 2 comments:

Perpetual Motion: The Language of Movement in Football

Tune into the soon-to-be-defunct ESPN Classic on any quiet evening and you'll notice very quickly just how slow football used to be. Any hint of panic would instantly be remedied with a prod of the ball back into the grateful hands of a goalkeeper, who would punt the ball downfield at his leisure towards a lumbering no.9 (a proper old fashioned one, of course, rather than the modern, false variety).

Then, in 1992, football's Big Bang occurred. A dull, cynical World Cup two years earlier had the game's lawmakers heading for the drawing board. It would be fascinating to discover the ideas that never made it onto the pitch, but the result of this enforced introspection was the single most important development in modern football history - the back-pass rule. Outlawing the handling of a deliberate pass to the goalkeeper made with the boot (amended in 1997 to also include throw-ins), the new directive transformed the dynamic of matches overnight, and followed the claim by FIFA's then General Secretary, Sepp Blatter, that "spectators do not go to football matches simply to see the goalkeeper standing still with the ball in his hands".


Over two decades later, the game is - with some notable Latin-country exceptions - overrun by players built like super middleweight boxers, possessing the pace of 100-metre Olympians and breathing with the respiratory capacity of a varsity rowing crew.

For all the appreciation of skill and metronomic possession-hoarding, football is still a sucker for pace in any form - searing, lightning, blistering and explosive pace (often "to burn"); bags of pace or pace in abundance; and the curious concepts of real or genuine pace, suggesting that some players might be carrying counterfeit (or perhaps deceptive) pace. This perpetual motion has forced the football media to consult their thesauruses to find more nuanced ways of describing how a player propelled himself from A to B before he troubled Row Z.

The wide areas of the pitch are the logical place to start, where jet-heeled wingers aim to give opposing full-backs as torrid a time as possible. They may find, however, that their adversary is no slouch and he himself may need no invitation to bomb on. The historically undersung full-back has been liberated by the era of gung ho-ism that the back-pass rule ushered in - they are now free to buccaneer, maraud or swashbuckle to their lungs' content, provided they are just as good going the other way. Insipid games, conspicuous by their lack of dynamism, require pace to be injected into them, something that has so far escaped the suspicious eye of sport's doping authorities.


In amongst the power and bustle, diminutive players must jink and slalom their way to success, although the mazy run remains available to players of any dimension. Graceful playmakers are said to glide across the turf, while defensive midfield dogsbodies merely scuttle, allowing their more attack-minded colleagues to apply for the coveted licence to roam. Space exists only to be burst into, front posts are always darted towards, while the back stick is the best place to indulge in a spot of ghosting in.

It's not all high-velocity stuff, however. Trudging (often unrepentantly so) is the frequent exit strategy of choice for red-carded players, while nosebleed-defying centre-halves tend to amble forward for set-pieces. An injured player's movement is always closely monitored by TV co-commentators, who keep us updated on his freedom movement on a scale ranging from "gingerly" to "moving a bit more freely now".

We have a lot to thank the back-pass rule for in creating a more dynamic sport, but spare a thought for the poor goalkeepers who have been scampering, backpedalling and on-rushing their way out of their comfort zones - and often into no man's land - ever since 1992.

Posted by FootballClichés at 18:53 14 comments:

Pseudoscience: All Filler, No Killer

Visualised: 57 years of FA Cup Final pre-match build-up. That's two-hundred and eighty-two hours and forty-five minutes of talking about how magnificent Wembley's hallowed turf is, foreign players claiming to have watched finals while crowded round a small TV in their village, and painfully shy 5-year-old being asked for their score prediction. 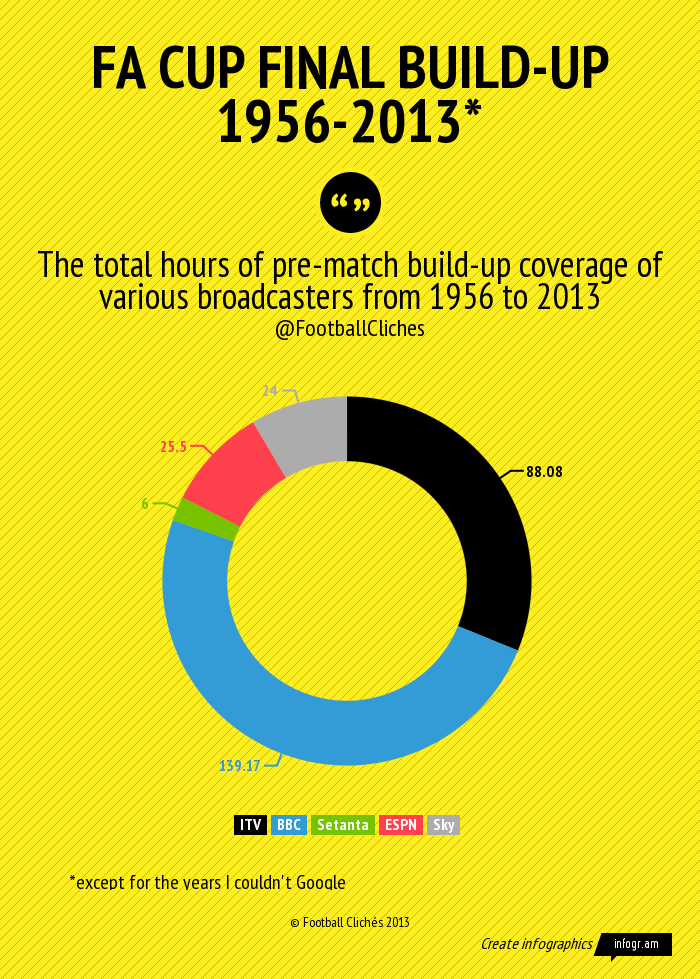 Posted by FootballClichés at 16:36 No comments: