A Journey Into The Unknown 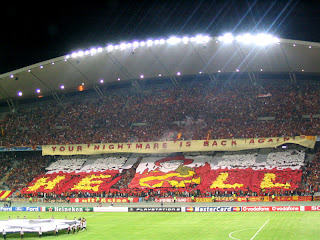 Mid-August always sees several of Britain's top clubs have their embryonic league campaigns inconvenienced by the pesky qualifying round of the UEFA Champions League. The third and fourth placed Premier League sides from the previous season, plus whichever two lucky clubs manage to scrap successfully for the top two places in Scotland, are required to navigate this obstacle before they can properly take their places at the top table of European football.

Inevitably, the opponents for this tie (which the big guns probably view as a right pain in the arse, whatever they say about not underestimating the other side) will be from Eastern Europe. Throughout football history, teams from the former Eastern Bloc have been viewed with the traditional suspicion and often awe. The 1980s saw the powerful emergence of crack East European outfits, before the collapse of the Soviet Union and the influx of foreign players to the Premiership, began to significantly (although not entirely) demystify the football culture of the region.

Nowadays, there is a very high probability of drawing a (possibly little-known) East European side in the qualifying rounds of the European competitions. In the Champions League third qualifying round, roughly one-third of the teams are from Eastern Europe. In the UEFA Cup second qualifying round, this representation increases to almost fifty percent.

But enough of the history lesson - books such as those by Jonathan Wilson or Simon Kuper will provide a much more comprehensive account than The Angle... would dare to attempt. Instead, this article's aim is to examine the way that our football teams and media approach such European ties. As always, there is a strict and unbreakable code...

Fig 1.0
The Scale of Difficulty of East European Away Legs (SDEEAL), brought to you exclusively in association with All of the above adjectives are employed to describe European away matches in Eastern Europe. Awkward (or awkward-looking) matches tend to be against teams from countries without a significant footballing pedigree, and who don't necessarily pose a real footballing threat. However, the perceived awkwardness is understood to stem from the distance that must be travelled to play the game, the state of the opponent's pitch (even if the match is moved to their country's national stadium after "UEFA safety concerns") and the fact that the game will probably be covered on an obscure television channel here in the UK.

What distinguishes potentially tricky ties from simply tricky ties, you ask? Well, ignorance. A potentially tricky trip could be to a relative unknown, or a European debutant - they might provide a stern test, but could just as easily be put to the sword by a straightforward professional performance. Quite simply, the "potentially" part serves as a get-out clause for the media correspondents. Genuinely tricky trips tend to be to better-known opponents, perhaps once-great clubs that have fallen upon rather more modest times. As Coxie pointed out in the previous article, any semblance of a European record back in the day is enough to strike even the slightest bit of fear in a media pundit ahead of a tricky European tie.

Tough ties, at least in the qualifying stages, tend to be the sole domain of the Glasgow clubs. While their English counterparts look far stronger on paper than their opponents (before the SDEEAL model is applied), the Old Firm risk being paired with rather more formidable propositions before they can reach the group stages. Rangers' clash with Crvena Zvezda (yes, we all know who they really are...) was therefore labelled "tough" accordingly.

All clubs will rather avoid having to make a daunting trip at this stage. Such matches take place inside vast concrete bowls that pass as "Olympic" Stadiums, packed to the rafters with a partisan crowd, who generate a hostile atmosphere. Sadly, the modern era of satellite telecommunication denies us the grainy images and muffled commentary that further enhanced the alien unfamiliarity of away matches in Eastern Europe in the 1970s and 80s. Dynamo Kiev used to be the paradigm of daunting trips, but the description now tends to be more sensibly restricted to genuinely daunting footballing opposition such as Barcelona.

However, nothing compares to the away match that nobody wants - Turkey. Although the menace of such journeys peaked with Galatasaray in the 1990s, visiting sides are still given a typically warm Welcome to Hell. Fearsome banners and relentless chanting, all drenched in a generous helping of goat's blood, are separated from the wide-eyed visitors only by a line of Turkish military. All of which is guaranteed to ruffle the feathers of any Premiership tourist, apart from Graeme Souness.

There are signs, however, that the mystique of East European away trips is fading. Teams are hardly flying with Aeroflot and staying in log cabins in Siberia before such matches. Despite the taming of the perceived terror of these away legs, a few cliches remain intact. Teams are still said to to face a journey into the unknown, against teams they no almost nothing about. In fact, managers are surprisingly happy to admit their relative lack of knowledge of their opponents, and that they have relied on DVDs and sending their unfortunate right-hand men to see them in action. The Angle... has no idea why they bother - we can guarantee that the scouting report will inevitably draw attention to the East Europeans being well-drilled, with the ability to run all day.

So, when you're tuning into ITV4 or Channel Five to see your team take on Lokomotiv Chernobyl away, bear our latest offering in mind.

The Bluffers Guide to Punditry

Yesterday, we brought you a guide to the pundits who will be bringing you the sort of insight only years of playing at the top level supposedly gives you. Of course, being an ex-footballer, a hard week's work would consist of about eight hours of playing a sport you love and getting paid fortunes to do it. As a pundit you will be paid less than you were as a player, so to do more work seems the mark of insanity. Scaling down the pay/work ratio means that our newly appointed pundits will only work in the time they are on the screen. But will this lack of preparation be shown up live in front of the nation? Not if our army of readers includes, as it surely does, luminaries from the professional game.

You pundits should worry no more as, on the eve of the season, The Angle... brings you The Bluffers Guide to Punditry...

The Angle... appreciates that it’s a difficult time to come into punditry. When the Premier League was in its infancy and Richard Keys still wore a Sky Sports corporate blazer, the last truly successful foreign players were widely regarded as the Dutch pair Muhren and Thijssen who played for back in the 70s. However, the influx of foreign players meant that no longer would the names be restricted to Smith, Adams and Jones. New, exotic and difficult to pronounce ("rather you than me, John, he he he") names would become widespread.

Things have become even worse with the expansion of European football and the seemingly endless proliferation of Eastern European states. Now, with the UEFA Cup extended to incorporate nearly 5,000 teams, it becomes even more difficult to keep the fact you know little more than Joe Public. First of all, don’t panic - Crvena Zvezda is actually Red Star Belgrade and you certainly have heard of them!

Rule 1: All information is good information. If you do know something about someone featuring in the game, don’t be afraid to blurt it out, even if my nan knows that same bit of information. Which football fan committed enough to watch Copa games in the middle of the night would not know Julio Baptista spent last season on loan at Arsenal? None, yet this factoid was trotted out continuously in every one of ’s games.

Rule 2: If an obscure team has a player who has been linked, no matter how tenuously, with a move to , single him out as the danger man. Even if it is the goalkeeper.

Rule 3: If the game is an international, one of the players will surely be familiar to you. Again, pick him out as the main source of danger. This is especially helpful if have picked a side of largely home-based players but have included a Real Madrid player, isn’t it Trevor Francis? Don’t think we didn’t notice you pick out Robinho out as the man to watch in the Copa America final!

Rule 4: Predictions for the game are largely unaccountable, but to show you know what you’re talking about, make them as non-specific and uncontestable as possible. A good phrase is “I think we can expect a tight opening twenty minutes, before the game opens up in the second half as the players tire” (ie basically the model of nearly every football match ever played).

Finally, Rule 5: If an English team is playing a team you’ve never heard of, the match will automatically set to a minimum difficulty of “tricky”. Never mind that you are unable to name a single player, their manager, or any of their results in the last six months, this simple formula will suffice. We saw this in action last season as Tottenham’s game against Eintracht Frankfurt was labelled “tough” purely on the basis that the German side had played Real Madrid in the final of the European Cup 47 years ago.

Follow these simple rules and the rest of the season will be a doddle. Good luck, pundits!

Coxie.
Posted by FootballClichés at 13:43 2 comments: